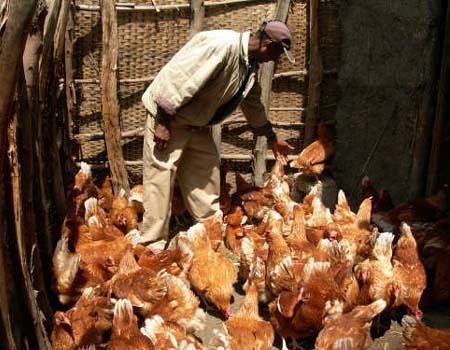 In Ethiopia, chickens are considered valuable assets for smallholder farmers and make an important contribution to food security, poverty alleviation and the promotion of gender equality within the household. They provide meat and eggs, and generate income (from sales of birds and derived products). But there are many constraints to the development of the smallholder chicken production in improving productivity and overall livelihoods of rural and peri-urban smallholder households in the country.

ACGG is implemented in selected villages of rural and peri-urban subnational zones of the regional states of Tigray, Amhara, Oromia and Southern Nations, Nationalities and Peoples’ Region (SNNPR), and in the Addis Ababa city administration region.

The project conducted a baseline study at the start of the project. The baseline information was also used to inform the chicken strain choices for the project and implementation of the on-farm experimental testing. The cross-sectional baseline study covered a total of 1,257 households. Following a description of the survey design and tools, the study presents the main findings in the form of cross tabulation, rank-index, tables, and graphs.

Chicken and egg consumption (in the 3 months leading up to the survey):

The information generated from the baseline survey informed the design and implementation of the longitudinal (on-farm) study. It is also hoped that the information generated in the report can support future chicken research and development activities. In addition, the procedures followed and the baseline tools developed can be adapted for similar purposes outside ACGG subnational areas. Finally, the data provides a useful reference to study similar cases.