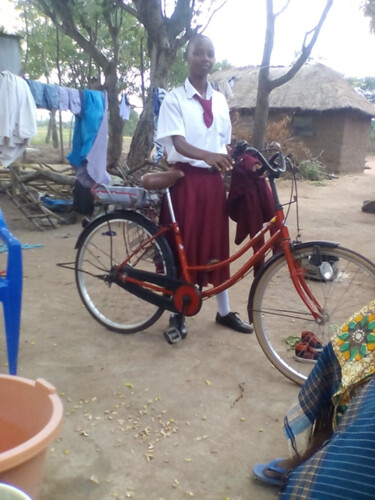 Maghembe’s daughter Kefleni with her bicycle purchased through the sale of chickens (photo credit: ILRI).

Victoria Maghembe is a 34-year-old farmer at Kijima Village in Mwanza, Tanzania. She lives with her husband, three sons and a daughter. The family’s livelihood is based on crop farming and keeping livestock including chickens.

In 2004, the family’s chicken flock was wiped out by Newcastle disease. ‘I was so disappointed and had no capital, so I paused my chicken farming for about a year. After that, I bought 10 hens and 6 cocks from neighbours, says Maghembe. This time, she consulted an extension officer on the best way to raise her chickens. She built a fence around their enclosure, and fed them with whole maize grains, maize bran, millet and sometimes sunflower seed cake and fish meal in addition to scavenging.

Currently, she has 33 local breed chickens. Maghembe sells chickens and eggs at the farm gate and some are used at home. The price of local chicken ranges from Tsh7,000-10,000 (USD3-4) for hens and Tsh9,000-15,000 for cocks. The income earned is spent on school fees and household needs, including medical services and feeds for the chickens.

Maghembe is one of the farmers taking part in the International Livestock Research Institute (ILRI)-led African Chicken Genetic Gains (ACGG) project. In addition to her 33 local chickens, she received 25 Sasso chicks, 20 hens and 5 cocks from ACGG in 2015.  She gives extra feed (such as maize bran and fish meal) to the birds in addition to their scavenging as instructed by the village field officer working for ACGG.

Sadly, 10 hens were lost due to coryza and fowl pox. When the remaining birds were 20 weeks old, she was informed of the importance of culling the cocks. She now has 10 Sasso egg-laying hens and collects on average 35 eggs per week. In December 2016, she sold 3 Sasso cocks each for Tsh20,000 (USD9) and slaughtered 2 for the family. The same month a total of 90 eggs were each sold for Tsh300, earning Tsh27,000 in total. She also decided to sell 5 local chickens, 1 cock for Tsh10,000 and 4 hens at Tsh8,000 each. In total that month, she made Tsh129,000. She used the money to buy a bicycle worth Tsh90,000 for her daughter Keflen and the balance for feed for her chickens and to meet some domestic needs.

Kefleni is Maghembe’s only daughter and she is a Form Two student at Isakamawe Secondary School, which is 7 km from Kijima village. In that past, she would walk for two hours to and from school and would often miss morning classes or was too tired from the long walk. ‘I was also compelled to wash my uniforms daily which made my life as a student difficult,’ she says. ‘I am grateful that I now have a bicycle’. I spend 40 minutes getting to school and back home, which gives me time to rest, study and help my mother at home’ she adds.

With support from ACGG, Maghembe has improved both her poultry stock and productivity through improved chicken breeds and feeds. Although these inputs incur costs for smallholder farmers, her experience shows that over time farmers making such investments will begin to see great profits.