The African Chicken Genetic Gains (ACGG) program’s ‘in focus’ communication and visibility campaign on gender which is also known as ‘Where chickens and women rule’ will resume in September and October. 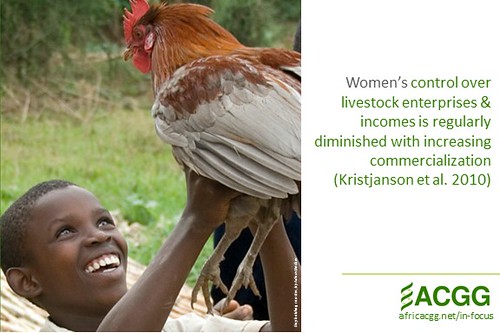 The first part of this awareness campaign was launched in April 2017 and saw the release of various stories and interviews which are available in the ‘In focus‘ page of our website. That first part focused on ‘the gender situation as is’ in ACGG program countries and sites.

Some of the insights on the current state of gender in these areas are captured in upcoming publications about the gender capacity assessment that Transition International conducted in the second quarter of 2017, and in the country visits to Ethiopia, Nigeria and Tanzania by gender specialists from the Royal Tropical Institute (KIT) (see interview with Julie Newton and Katrine Danielsen).

This second part of the gender awareness campaign will feature the main gender-related interventions that the program team will concentrate on going forward. It will feature video highlights of some of the work on gender that was done in the past few months, new publications on the subject, including the ACGG gender strategy currently being  developed, postcards similar to those from the first phase and more.

The second phase will culminate with the gender strategy validation workshop at the fourth Program Management Team meeting from 18-22 September and with the release of new gender publications towards the end of the year.

Just like in the first round, experiences from the second tier of the campaign will be relayed through:

Read more about the ‘In focus’ campaign.