The following post is a summary of a women’s group discussion that was part of an African Chicken Genetic Gains (ACGG) program gender capacity assessment activity in Chalinze village in Bagamoyo District, Tanzania.

The women farmers of Chalinze village in Tanzania prefer the chickens they have received through ACGG because of their ‘Ukubwa na uzito’ (Swahili  for ‘big size and weight’). Because of these traits, these farmers have been able to demand a higher market price for their chickens and eggs. In comparison to the local breeds, the ACGG chickens can fetch anywhere between Tsh 18,000–20,000 (USD 8–9), which is Tsh 5,000 –10,000 more than what the local varieties cost.  The same holds true for eggs which are bigger in size than the local varieties. An egg from a local breed is sold for Tsh 250 while the ACGG eggs bring in Tsh 300–400 (USD 0.13–0.18).

Men have not been involved in the keeping and selling of the traditional chicken varieties. However, with the introduction of the ACGG program chickens men are now taking roles that were predominantly women’s. While men still do not help out in cleaning the chicken coops or chicken rearing, they are involved in constructing the chicken houses, feeding and egg picking. It is also important to note that children take part in all activities of poultry keeping and care, starting from 8 – 9 years of age. 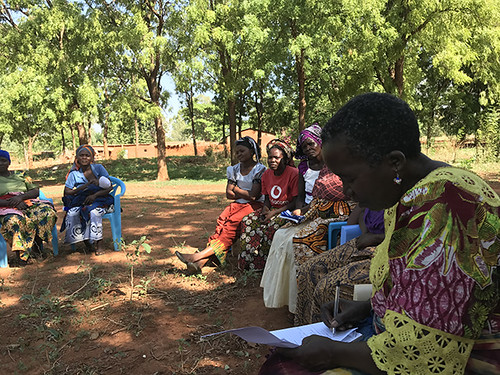 Though men have taken an interest in the chickens, to the extent of buying feeds and drugs, they have not taken over the decision-making role. Women make decisions on what and when to sell, when to slaughter the chickens and how to spend the money earned. Most of the women who participated in this assessment in Chalinze said men respect their decisions because the chickens were given to the women who have a final say in how the birds are managed.

The money earned from chicken production is spent on children educational expenses, including uniforms, shoes and exercise books. Some of it is also spent on improving the nutrition of the family, improving the household and buying other livestock. The experiences and benefits acquired from the project chickens ranged from paying for the labour cost in house construction, buying iron roofing sheets, to cooking and eating ‘chips-mayai’, fried potatoes with eggs, for the very first time. The project chickens fetch such a good price that some women have bought small goats with income from selling one cock or an adult goat with the sale of two cocks. As a result, the women claim, the project has brought financial discipline to the family.  The women also assert that gender based violence has declined as a result of the project intervention.

The participants have also observed the dietary and scavenging preferences of the project chickens. The local variety chickens prefer to scavenge for themselves and do not usually stay in the same place, and as such, they do not have a higher cost associated with their upkeep. However, the project chickens are not willing to scavenge and they eat a lot.

The feeding preference of the project chickens, is therefore relatively more expensive, and can create a problem in limited resource settings, especially during times drought as currently being experienced in Chalinze. At the moment, farmers are facing the question of who they should feed, children or chicken as there is currently a shortage of maize bran, which is a major component in chicken feed.  The shortage has occurred because people have resorted to eating ‘ugali’ or maize meal made from whole maize. They do not separate the maize from the bran before milling in order to increase the amount and nutrients of maize flour meant for human consumption.

To compensate for the shortage in chicken feed, some women have reported that they provide the chickens with a feed mix which has a little maize bran and lots of grass. In addition to the drought, the women said diseases remain a constant challenge.  The common ones include air tract infections (cough and cold), diarrhea, leg wasting and leg swelling. Also, some postmortem dissections have revealed clotted blood.