This is the second part of Aneth John’s story. Read the first part.

In 2016, Aneth John was informed that she was among the farmers selected to join the African Chicken Genetic Gains (ACGG) Program in Tanzania.

As part of joining ACGG, she received 25 birds (22 cocks and 3 hens) that she keeps together with other local chicken breeds. Aneth and her husband keep them under semi-scavenging conditions. They roam about during the day and are confined at night in a chicken coop. So far, the different breeds have survived well together. The birds are fed a mixture of maize bran, broken maize and sunflower cake and when available, kitchen waste including leftovers like maize meal, beans, and rice. Green vegetables (such as Chinese cabbage) and fruits (such as avocado and banana) are also used as supplementary feeds. So far, out of the 25 chickens only 1 bird has died. 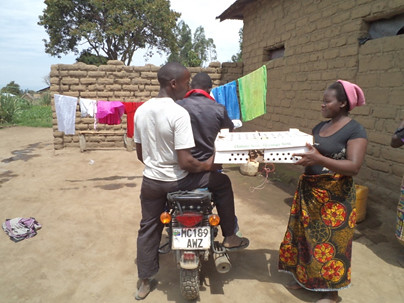 Upon the advice on an ACGG field officer, Aneth culled some of the cocks at 20 weeks of age, because keeping on feeding them would have led to losses. At that time, on average, the cocks weighed 3 kilograms each. Between November and December 2016, she and her husband sold 11 of them for Tsh 15,000 (USD 7.5) each and they consumed 2. They earned Tsh 165,000 and spent Tsh 140,000 to buy day-old Sasso chicks for Tsh 1400 each. The balance was used to buy a 150 kg bag of fertilizer for Tsh 40,000 for their maize farm. But this required an additional Tsh 17,000 from the family reserve. Aneth says after receiving the chicks, she and her husband have had to sell more cocks to be able to buy chicken feed and fulfill other household requirements.

Despite this challenge, Aneth and her family have benefited greatly from the ACGG project. First, she and her husband have learnt how to better manage chickens, particularly how to prepare and use compounded feeds as well as vaccinations to control diseases. These measures have resulted in reduced mortality and increased productivity of their chickens. In addition, the chickens she received from ACGG have been very good for business because they do not succumb easily to diseases, grow faster and are bigger in size and easily fetch a good market price. Moreover, because of their larger size, they produce more meat.

When asked why she sold a cock for Tshs 15,000 which is close to the price for a local breed, Aneth said the local market is not [yet] assured and setting a high price might put off buyers.

Though they want to invest more in improved chicken production, Aneth and her husband face a number of challenges in their poultry production including lack of capital. Improved chicken feed, such as sunflower cakes, is expensive or unavailable in their village. Also, some hens do not lay eggs daily, usually skipping two or three days, and when they do, they do not sit on the eggs. She has also observed that the birds are susceptible to coryza.

But the couple is determined to overcome these challenges. They plan to have 1,000 birds by the end of 2017. Their aim is to use income from maize sales this year (they hope to harvest a minimum of 50 bags and and sell at Tsh 50,000 each) to expand their poultry production. They are currently constructing improved coops for their birds which they will complete in May 2017.